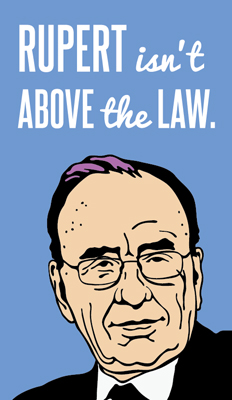 Investigators in the United Kingdom report that News Corp. executives authorized hundreds of thousands of dollars in bribes to be paid to police officers and other government officials.

But these reports of rampant criminal behavior have yet to trigger a prosecution of Rupert Murdoch and his media empire here in the U.S., where executives can be held liable for systematically bribing foreign officials.

Murdoch has hired legions of lobbyists and lawyers to stop U.S. prosecutors from reining in the culture of corruption that has overtaken News Corp. Their goal is to defang the Foreign Corrupt Practices Act, which makes it unlawful for a U.S. corporation to pay off a foreign official to advance or protect its business interests.1

News Corp. has also muted news coverage of the phone-hacking and bribery scandals across its news empire.

This is how Murdoch works. For years he has wielded enormous power to fight the public interest and place himself and his fellow News Corp. executives above the law.