Why Is the Media Ignoring SOPA? 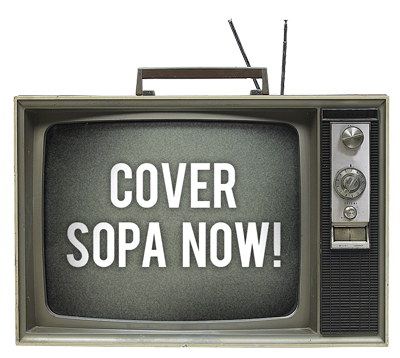 Opposition to the Stop Online Piracy Act, or SOPA, has reached a boiling point. Millions of activists, hundreds of startups, social media sites like Tumblr, Reddit and Twitter and even big companies like Google, Yahoo! and eBay have joined with Free Press and other Internet advocacy groups against it.

This Web-censorship bill could destroy free speech on the Internet. Yet this bill — and the backlash against it — have received virtually no coverage from major television news outlets. According to a recent study by Media Matters for America, the blackout has been complete, with ABC, CBS, Fox News, MSNBC and NBC devoting zero time to the issue during their evening newscasts.

This is what happens when the interests of big business get in the way of the need to inform the public and protect free speech. As it turns out, the owners of ABC (Disney), CBS (CBS Corp.), Fox News (News Corp.), MSNBC (Comcast) and NBC (Comcast) are all supporters of the bill.

Read more about the media's coverage of SOPA here.