Give Back Hollywood’s Dirty Money 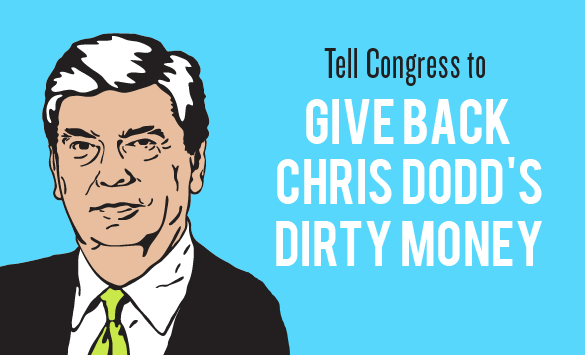 After Congress shelved the controversial PIPA and SOPA bills, Dodd told Fox News: “Those who count on quote ‘Hollywood’ for support need to understand that this industry is watching very carefully who’s going to stand up for them when their job is at stake. Don’t ask me to write a check for you when you think your job is at risk and then don’t pay any attention to me when my job is at stake.”

This is what corruption looks like in Washington. It’s outrageous that Dodd — himself a former senator — is leveling these threats. Our elected officials must send a signal back to Dodd and the rest of K Street that our nation’s laws can’t be bought.

It's time that Congress showed that its votes are no longer for sale. Congress must give back the MPAA’s dirty money or give it to charity. Congress must make it clear to the world that it won’t be bullied into supporting censorship.

Below is our list of the MPAA "Dirty Dozen" — the top recipients of the MPAA's cash (data shows contributions from Q1 2009 to Q2 2011, and comes courtesy of the Sunlight Foundation's Influence Explorer).