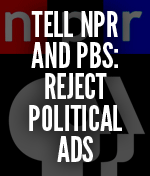 Sesame Street, brought to you by Mitt Romney. Up next, Downton Abbey, but first, a word from Obama’s Super PAC.

This is no joke! A U.S. appeals court just struck down a ban on political ads on public broadcasting.1 That means your local PBS or NPR station could start running nasty attack ads right away.

Many Americans turn to public TV or radio to escape the offensive political ads that have flooded commercial stations.  Polluting public programming with these misleading and negative ads is not in keeping with the original vision of noncommercial broadcasting.

An overwhelming majority of Americans say public funding for public media is money well spent.  We need to invest in public media, not open it up to dirty Super PAC money.